When you're in the forest, on your own, have you noticed how noisy it really is?  You would think it was a quiet withdrawal from the busy-ness of the suburbs, but the first half hour of a trail run I am always overwhelmed by auditory overload.  Branches creak and crack, leaves whisper in the breeze, a kereru's wings pound.  Birds sing and call and I wish I knew enough to recognise anything but another Tui!  I even think I can hear the early morning dew, slowly seeping to the ground.... but I always did have an over-active imagination....

This sunny morning in October sees me off on the first of my 12 Trigs in 12 Months adventure.  The trig is an old friend, Otawa trig, reached from the intersection of Reid Road and Te Puke Quarry Road.  The first hour of today's journey I've run often, but today I'm planning to head right along the range to Otanewainuku, a challenge which has beckoned me since I first started exploring around Papamoa.  I think it's about 20kms, a really big run for me at my plodder's pace.  My map says the middle section is route marked only, meaning I'll have to keep my eyes peeled as I run.  The track is rough and uncleared in parts, great for twisted ankles.  There are numerous tracks leading off the main ridge, I might find myself back at the road.... but not at Otanewainuku.  It's hunting season, and I've meet the camouflage men with their rifles in the past.


It's a run I've planned with my friend Clare, but now that I've come up with this daft 12 trigs plan, I'm impatient to get started, and she's away for the weekend.  There's also an element of Girl Vs Wild.  Can I follow the route?  Can I run that far?  Will I sprain an ankle?  Will I end up there all night?

As I was packing my bag the night before, Tom realised that I was going on my own.  He had presumed I was running with Clare, I don't think I had intentionally not updated him.......  I was excited.  He was concerned.  The sh*t hit the fan.  He's generally fairly low maintenance as far as husbands go, I mean, Clare and I ran at Summerhill Farm in the dark right through winter and he didn't even blink an eyelid.  But for some reason, this run through to Otanewainuku got his back up.  Well, the reasons apparently were that I don't know how to read a map, I've never been that route before, they're hunters routes not DOC tracks, I've not been running that far, the tracks are rough and I might sprain an ankle, I'd be on my own......  they were all fairly valid, except I was pretty offended when he said I couldn't read a map!  I've been practising at Summer Nav, and actually take the map reading job in some events since my map reader extraordinaire Manu is having a baby.  I mean, I often say I can't read a map, but I don't really mean it!

Anyway, after a whole lot of convincing, and a real fear that he might say I can't go, I convince him that the worst which happens is I end up at a different exit road and I'll run until I hit a farmhouse to ring him.  (and that's only if I don't have reception on my trusty $50 cellphone.)  I show him my bag with maps, compass, first aid kit, survival blanket, polyprops, goretex jacket and a gourmet picnic. We set up meeting times, back up plans, and back up back up plans.

I hit the trail 7am the following morning, with heightened senses.  If I stuff this up, he'll say "I told you so".  And actually, as much as I've reassured him it's safe and I'm fine.... I'm really quite scared in the forest.  I know I can find my way out of this forest, just follow my nose for a day or two and it's not that big, I'll hit a road eventually.  It's the 'bad man' concept that worries me.  I have this idea that in the caves on the way to Otawa would be exactly the sort of place a homeless 'bad man' would live.  So, as I run, I'm listening to everything around me, becoming accustomed to the sounds of the forest.  The bushes sweep shut again behind me, and repeatedly I whirl around to see if the sound is someone following me.  I dislodge a broken branch and as it clatters behind me I think it is footsteps so I sprint 20 metres before looking.  I'm quite ridiculous I know.  I hope no one reads this blog.....

Suddenly I hear a sound which is definitely NOT natural.  It's metal on metal, definitely man made, really close, just a metre or two to my right.  It's amazing what you can think, feel and do in the space of milliseconds.  I'm imagining the 'bad man' coming for me, I hesitate and consider which way to go, my stomach clenches, and I do exactly what I've always planned NOT to do, I freeze.  The metal clinks again, and then four furry feet appear wrapped around a tree trunk right beside the track.  They shuffle up a metre, fall back down, the chain of the trap clinks again, and the trapped possum hides again behind the tree.  It takes a while for my heart rate to return to normal and head back off.

The track up to Otawa trig is just stunning and I never get sick of it.  I'm always amazed considering how close it is to the city, that more people don't walk and run there.  I very rarely see anyone, mostly just hunters, and I'm usually eating the cobwebs which spiders have spent all night making, meaning I'm the first person through in a while.  The native forest is like a scene from Lord of the Rings, all green and lush and mossy.  I have to concentrate pretty hard on where I put my feet, which is why I prefer to run off road, it takes my mind off my sore legs.  The trail has been cleared recently though, and some parts where previously I haven't been able to see where I put my feet are a bit quicker to move through now that  I can see the tree roots.

55 Minutes and I reach the first trig, stop for my first break, pleased with my time so far, although I know I can't keep it up.  I sit on the bars of the trig while I eat my muesli bar, text Tom to tell him I'm not lost yet, and look at my map just for fun, because I know where I am.  I completely miss the fact that my bum is pretty much sitting on a little sign taped to the trig which apparently said "Run Tui, Run! Run this way!"  Tom told me about it later in the day, he saw it on the downhill leg even though it was facing me as I ran up.  Terribly disappointed to have missed it, and  still haven't managed to go and collect it for my scrapbook.

Two hours in I take another break, secure in the fact that I am in the middle of nowhere and haven't seen a soul all day.  A quick wee stop and I set up with my map and scroggin, only to have a fully camo'd hunter step out of the bushes and ask if I am lost.  No, I say, possibly slightly peevishly......  my instinct tells me he's not the 'bad man' even though his face is painted and he's carrying a rifle.  "Anyone else coming that way" he asks, pointing back the way I've run up.  "Yes, a couple more".  (I don't want him to know I'm on my own!)  So he heads off to stalk the deer which I apparently scared away with my big clompy footsteps.  I warn him I'll be coming past in ten minutes and please not to shoot me.

The route marked through the middle of the ridge is actually even better marked than the first leg, and I have no problems making my way through to Whataroa waterfall, which is so pretty it's a great excuse for my third stop of the day.


Shortly after, I hit the Rimu Loop walk at Otanewainuku.  Tom has texted to say that him and the girls are here already and are walking clockwise.  I turn anticlockwise to meet them, and have to run the loop twice before I catch them, turns out maybe he's not THAT much better at navigating than me anyway!  I've run through in 4 1/2 hours, including 3 ten minute rest stops.  My legs feel a bit achy for a few days, and I've got a raw part on my back where my hydra pack has been rubbing, a few scrapes and scratches but generally unscathed. 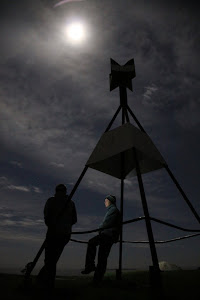